Here, those who’ve been through the experience of saying good-bye share what felt right to them — and what they wish they’d done differently.

It’s hard to say good-bye, but putting off meaningful conversations is perhaps the number-one source of regret. Time and again, families ask Massachusetts hospice nurse Maggie Callanan to tell them exactly when the final hour is approaching, so that they can time their good-byes. This is dangerous, she says, because it’s impossible to predict the final breath. “Dying people have the uncanny ability to choose the moment of death, and it’s not uncommon for them to spare those they love the most or feel protective of by waiting until those people leave the room,” says the author of Final Journeys: A Practical Guide for Bringing Care and Comfort at the End of Life, who has witnessed more than 2,000 deaths. 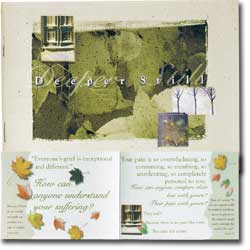 “I felt cheated because I was so determined to be there with her — and she died when I ran out to use the restroom,” says a North Carolina man of his mother’s death.

“I wish I’d spent less time focused on making sure she wouldn’t die alone, and more time on telling her what she meant to me.”

Dying people want to hear four very specific messages from their loved ones, says palliative-care physician Ira Byock, author of The Four Things That Matter Most: “Please forgive me.” “I forgive you.” “Thank you.” “I love you.”
“Ask yourself: Is there anything critically important that would be left unsaid in our relationship if either of us died today?” says Byock, “It’s not as if anything you say is wasted if the person continues to live awhile.”

LESSON #2: IT’S OK, EVEN COMFORTING, TO LET ON THAT YOU KNOW THE END IS NEARING

“When those in the room don’t talk about it, it’s like a pink hippo in a tutu that everybody’s walking around ignoring. The person who’s dying starts to wonder if nobody else gets it. This stresses them — they have to think about others’ needs instead of dealing with their own.”

It helps to reassure the dying person that you understand and are ready; in a way, you’re granting the person permission to set aside the troubles of this world. That’s not to say you need to use direct language about death. The dying often use symbolic language that indicates preparation for an imminent journey or change, Callanan says. Especially common is talk about travel, preparing for a trip, or seeing a particular place, “as if they have a foot in two worlds.”
One 49-year-old North Carolina woman’s mom, in the hours before she died, was worried about getting on the right plane and kept saying, “Let’s go!” Had the woman and her siblings known to expect this sort of thing, she says now, she’d probably have been less likely to think her mother was losing consciousness and more inclined to meet her words with encouragement for “safe passage.” “Nearing death awareness” (as the phenomenon of saying and seeing unusual things on one’s deathbed is known) is seldom caused by medications or dementia, research shows.

If the person talks about impending death either directly or indirectly through metaphor, go along.

Don’t correct the person (“No you’re not dying.” “But dear, we’re not going on a trip today”), Callanan advises. “It’s like trying to argue with a woman deep in full-blown labor,”

she says. A helpful response: “Tell me more.”
Expressing anxiety about finishing certain tasks is akin to that did-I-turn-off-the-stove worry we all feel before going on a trip, she says. Follow the metaphor with reassurance: “You’ve done a good job, you’re all set.”
Sometimes the person may ask, “Am I dying?” as a way of gauging your feelings. Instead of attempting to play God with a yes or no answer, reflect the question back: “I don’t know. How are you feeling?”
Others refuse to directly discuss death. Jo Reichel’s dad was one, despite being recommended for hospice more than once as his heart failed. “Then he told my mom he had to die by August 18 because the girls [his daughters, who are teachers] had to go back to work,” says the Royal Oak, Michigan, mom of three. “On August 11, at 1 a.m., he summoned all his children and grandchildren and spent the next two hours speaking privately to each of us. He died at 6:30 a.m. He knew, and I’m so glad we followed his lead.”

LESSON #4: TRUTH IS GOOD — BUT SO IS THE LITTLE WHITE LIE

“I wish I’d been less direct,” says Elle, a thirty-something consultant. When her mother, dying of lung cancer in Pennsylvania, asked her if she and her brother had reconciled after a long feud, she replied, “No, not really. Things are still rocky.”

“In retrospect, I wish I’d said something like ‘We’re working on it,'” she says. “I think she was sewing up loose ends and wanted to know her children would go back to liking each other.”

Being reassured that their loved ones will fare well in their absence helps people feel they can go peacefully, hospice workers say. It’s common to seek reconciliation with or between other people, with God or the universe, or within themselves. They often ask directly about particular relationships or express a desire to see someone they’ve been in conflict with themselves.
One Florida woman who was advised by a hospice worker to let her dying husband know she was OK with him leaving her snapped, “But I can’t. I don’t feel OK about it.” The professional then offered her alternatives that felt supportive but easier to say: “You look tired, sweetheart, please don’t worry about me.” “You’ve been such a fighter. If you need to rest, it’s OK.” “I understand what’s happening and it makes me so sad, but I’ll be all right.”
Or you could talk about the person’s accomplishments or legacy: “I’m so proud to be your sister when I think of all the things you’ve done.” “We don’t like what’s happening to you, but you’ve shown us how to stick together and be OK.” Help your loved one see that he or she made a difference in the world or within a particular family, which satisfies the human need to feel our lives had meaning and purpose.

LESSON #5: KEEP TALKING EVEN IF YOU’RE NOT SURE YOU’RE BEING HEARD

“My granddad was in a coma, and I felt I never got to tell him I loved him,” says a 38-year-old Atlanta engineer. “Later someone told me he probably could have heard me, and I’ve kicked myself ever since for keeping quiet.”

“Hearing is the last sense to leave the room, many studies show,” says Sherry E. Showalter, a hospice social worker in Tarpon Springs, Florida, and the author of Krumpled Kleenex: Stories of Heartache and Healing. That’s why you should always assume that a person who is unconscious, in a coma, or seems otherwise unresponsive can hear you, she says. “Say what’s in your heart.”
You may even get a reply. One family held the phone up to the ear of their grandmother, who’d been fading in and out of consciousness for days, so a son who was overseas and unable to travel could speak to her. Although she never regained consciousness, she faintly pressed her daughter’s palm when she heard her son’s voice. She died three hours later.

LESSON #6: TRY TO STAY PRESENT — DON’T GET AHEAD OF YOURSELF

Survivors report that each precious moment can feel emotionally charged — but overthinking this enormity can, ironically, dilute your ability to fully experience those moments.
At her much-loved father’s bedside, Philadelphia writer Lise Funderberg began to notice herself trying to mentally record and then hang onto touching interactions as she was experiencing them. “I was hyperaware that every day could be his last day, so I’d get preoccupied thinking, ‘Was that the last time he’ll ever call me ‘honeybaby’?'” recalls the author of Pig Candy: Taking My Father South, Taking My Father Home.

She wishes she’d been able to turn off her “recorder brain” more in order to simply be with him in the moment.

LESSON #7: TRUST YOUR INSTINCTS, NOT “THE RULES”

Modern American culture has developed an odd code of conduct about how to say good-bye, Callanan says. One common expectation, for example, is that people should be somber. The problem: These beliefs simply aren’t applicable to every situation.

Don’t let anyone tell you there’s a “right” way to behave.

For some people, for example, jokes and obliviousness are the right tone right to the end. “I don’t feel there was anything left unsaid, so I just chattered about me and my family as if she weren’t sick,” says New Jersey account manager Dawn Barclay of the 19 months her mother was hospitalized before dying, at 71, as the result of a stroke during heart surgery. “I wanted her to feel part of my everyday life, and she seemed to like it more than being pitied or hearing confessions about all the lousy things I’d done.”

LESSON #8: YOU DON’T HAVE TO ISSUE A FORMAL FAREWELL EVERY TIME YOU LEAVE THE ROOM

Not knowing if a parting is the final one brings the happiest of visits to an uncertain juncture. Here’s where it helps to have expressed love, appreciation, forgiveness, and reassurance in an ongoing way, grieving survivors say.
“There’s no law you have to ‘make your peace’ in one swoop. Say what you need to say many times and in different ways,” Callanan recommends. “You’ll be less likely to have regrets when the moment finally comes.”
A full-time mother in Chicago says she was relieved to learn that the origin of “good-bye” is “God be with you.” “It made talking to my dying father about what he meant to me seem like less of a heavy final exchange and more like an ongoing kind of blessing,” she says.

On parting, hospice workers suggest loving, open-ended phrases like: “I love you; sleep well.” Or in place of words, express all you’re feeling with an embrace.

LESSON #9: YOU CAN SPEAK VOLUMES WITHOUT UTTERING A WORD

It’s hard to say good-bye — but you don’t have to “say” anything. Most critical: Just show up. Be there.
Susan, a 46-year-old Ohioan, says she felt awkward while listening to the eloquent words of comfort her siblings were giving their dying mother. “Everything I thought of saying either sounded like a lame echo of theirs or like a cliché that Mom would know wasn’t really me. So instead I just sat next to her and held her hand for hours,” she says. “From the way she gripped it back, even in her weak state, I know it meant a lot to her.”
Foot rubs, stroking an arm or shoulder, kisses, smiles, and gazing into someone’s eyes all communicate compassion, love, and gratitude for a shared lifetime.

With or without accompanying conversation, your presence and your touch rank among the most eloquent, regret-free ways there are of saying good-bye.